Deadlines and
see what is Included and what is excluded

Day 1 – Saturday, September 9th, 2023 ~  We will  meet at St. Joseph’s Catholic Church in Perry Hall where we will board our coach for Philadelphia. We will fly overnight to Dublin, Ireland. Or if you booker your own ​airfare we will meet you in Dublin.

Day 2 - Sunday, September, 10th 2022 ~  Our Aer Lingus flight #114 will arrive at 8:55am in Dublin. After collecting out luggage, we will head to our luxury coach for a short coach ride and we’ll be in the to the charming, seacoast town of Malahide. Malahide had its beginnings about 795 as a Viking settlement on the Irish sea. The real reason to visit Malahide is to experience Malahide Castle and gardens. We are booked for a private, guided tour of the very impressive 12th century ‘Malahide Castle’. The castle had been in the Talbot family for almost eight hundred years from 1185 until it was sold in 1976!  You will have time to stretch your legs and stroll among the famous gardens, we will allow enough time to see the  ‘Walled Gardens’. The stone stables have been converted to a large and nicely done visitor center which it is full service for lunch and shopping. After our guided tour of Malahide Castle, Our driver will take us to  The Bunratty Castle and Folk Park . ​We get to stretch our legs in Bunratty Folk Park and explore the 26 acre site , as well as the Medieval Castle before checking into  the Bunratty Castle Hotel. Tonight, we’ll enjoy dinner at Durty Nellies at 6pm. Durty Nellies, is the bright yellow pub in the shadow of the15thcentury castle; Nellie’s dates from 1620. Their motto is, “Eat, Drink and Enjoy.” It has been described as and in fact is the quintessential Irish pub. Although tourists find their way to Nellies, it remains “the local” for the area residents and has that feel about it. Features live Irish music.

​Day 3 – Monday September 11, 2022 After a Full Irish Breakfast, we set off for the iconic Cliffs of Moher at the Atlantic ocean’s edge.. The highest sea cliffs in Europe. You will view the splendor of nature from your 700-foot high view of the Atlantic. The Cliffs, have over a million visitors a year not counting the dolphins, whales and scores of migratory and nesting birds with visitors. It will leave us excited and humbled.  Tonight we dine with the Lords and Ladies of Bunratty Castle at a feast of food and entertainment in the style of a Medieval Banquet.

​Day 4 ~ Tuesday, September 12, 2022 After a Full Irish Breakfast, we leave Bunratty to travel Northwest with a brief stop in the pedestrian-friendly “City of the Tribes”, Galway. You will be given a short list of suggested places to visit all of which are free. In Galway, we will be free to roam and explore things like the Galway City Museum, the King’s Head Pub if you wish your guide "Anne'' will suggest places you can have lunch.

Our next stop on our way  to Westport is Kylemore Abbey and Walled Gardens.  Kylemore Abbey is a community of Benedictine nuns: women committed to witnessing to the Gospel of Jesus through the monastic life of prayer, work, and community according to the Rule of St. Benedict at Kylemore Abbey in the heart of Connemara.
Since arriving in Kylemore on 4 December 1920, their community has been anchored in the spiritual, social, educational, and cultural life of Connemara and of Ireland. They established a boarding school for the education of the daughters of some of Europe’s most aristocratic families, as well as the daughters  of the local, working class Irish families.

For over three hundred years the community expressed its outreach of hospitality primarily in the education of Catholic girls in Ypres and later in Kylemore. The closure of their school in 2010 gave us the opportunity to explore our understanding of their mission . Today, they are engaged in developing a mission of Benedictine hospitality at Kylemore for the future.
A visit to Kylemore is more than an enjoyable outing. It is an encounter with a unique place that invites the visitor to relax and attend to both body and soul. We will check in and enjoy dinner tonight at the Westport Coast Hotel

Day 5 Wednesday, September 13, 2022 After a full Irish breakfast, will have free time to visit and shop in typical, Irish shops. Relax and leisurely explore the award-winning, picture perfect town of Westport. We will meet at our hotel in late afternoon, we will board our coach and set off for the Atlantic Coast road along the edge of the Atlantic Ocean on the haunting Achill Island We’ll stop for photo ops. We’ll learn about the island’s ecology and historic characters like the 16th century pirate Queen, Grace O’Malley and her infamous life and times. On our way back to Westport, we’ll stop for dinner at the family owned, Nevins Newfield Inn for dinner. 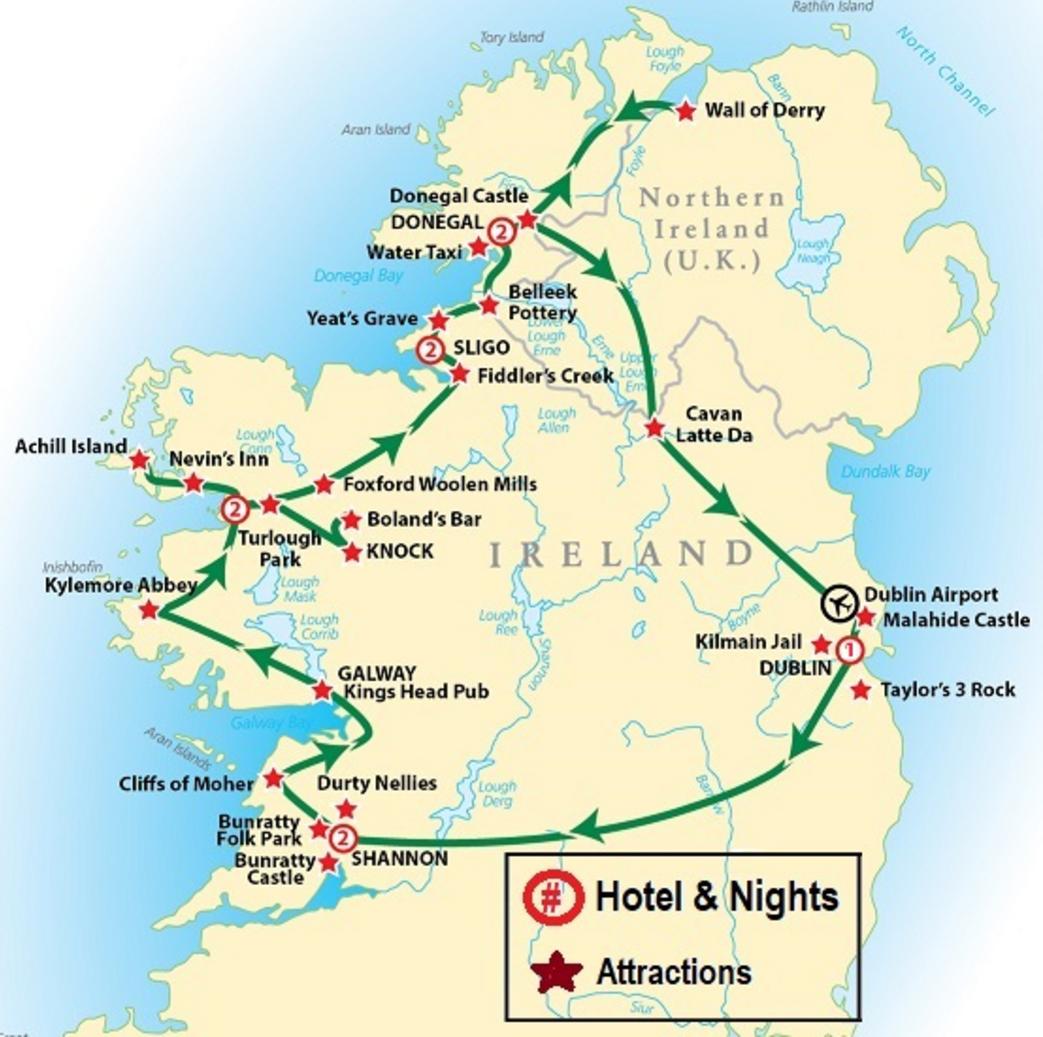 aka "The West is Best Tour of Ireland"

Day 6 Thursday September 14, 2022 After our full Irish breakfast, we leave lovely Westport head Northeast to Sligo Town. After a short ride, we visit The National Museum of Country Life, at Turlough Park. The museum showcases rural Irish life from mid nineteenth 19th to mid 20th century (the famine period 1840 to approximately 1950.  The modern museum building contrasts with the grand, Gothic Manor house built in 1865, and each is a reflection of the times they represent.  At its largest it was 8500 acre estate granted to the Anglo-Irish, Fitzgerald family by the Cromwellian land settlement in the mid 1600’s. The estate and village get their name from the Irish, Turlach which means a lake which dries up in the summer.

Day 7 Friday, September 15, 2022  After our full Irish Breakfast, we head Northeast and cross just over the border into Enniskillen, Northern Ireland which is still part of Great Britain. Our first stop will be at the Belleek Pottery Factory, which has been known for 160 years for  distinctive, basket-weave designs in fine, porclain china.

On the way back to Sligo town, we'll stop in the tiny village of Drumcliff to pay our respects at the grave site of Ireland’s favorite poet, William Butler Yeats. He rests in the shadow of the mystic mountain known as Ben Bulbin, at the church where his great grandfather was rector 150 years before.  Dinner tonight will be at Fiddler’s Creek Restaurant and Pub on the Garavogue River.

home of the Tir Connaill kingdom controlled by the O’Donnell clan.  Donegal sits at the mouth of the Eske river

and Donegal Bay with the Blue Stack Mountains and the highest sea cliffs in Europe, Slieve League. We’ll stop at the Abbey ruins at the foot of Donegal town, where a statue of the famous Red Hugh O’Donnell stands an eternal watch over the clans lands. We’ll have a guided tour of Donegal Castle built in 15th century by O’Donnell chieftains. We’ll learn of the historic connection between the American Choctaw Indians and Donegal. Weather permitting, we’ll enjoy a boat ride on Donegal Bay to catch a glimpse of seals sunning themselves on the rocks.

We check in to the Jackson Hotel. Dinner tonight will be at the hotel dining room in Ballybofay, Donegal.

Day 9 Sunday, September 17, 2022 After a full Irish breakfast, we will visit Derry , Northern Ireland on the Foyle river. Derry is the only, complete, medieval walled city in Europe. Walls are 20’ high and 20’ wide . They have never been breached which is why Derry is also known as the “Maiden City”. Derry’s history both past and present has been extremely complex and we will have a local  guide join us on our coach to guise us through the sights and events of that history. We will continue the tour atop the Medieaval wall with the impressive view of the surrounding landscape. We return to Donegal for dinner at The Salmon Inn, a short drive from town.

Day 10 Monday, September 18, 2022 After a full, Irish breakfast, we check out and head to our last and final destination, The Clayton Hotel,  Dublin. We will stop in Cavan at Smith’s Diner for a break and for those who might want lunch. We will continue on to The Clayton Hotel, Dublin. Dinner tonight is at Taylor’s three Rock and includes professional Irish musicians and dancers in a lively performance of Irish songs and dance.

* Transportation by Luxury coach from Baltimore County to the Philly Airport.

* Round trip Airfare to Ireland (If the Full Package is selected).
​* Thomas, a professional Irish coach driver who will stay with you until you leave Ireland!

* 2 Nights by Shannon in Ennis or Bunratty.

* Admission and meal at 'The Bunratty Medieval Banquet'.
* A dinner at the world famous 'Durty Nellies Pub'.

* Admission to 'The Cliffs of Moher'.
* Admission and Tour of 'Kylemore Abbey'.
* 2 Nights in Westport County Mayo.
* A coach tour and Photo Opportunity on Achill Island.
* Visit 'The Holy Shrine of Knock'
* Tour 'The Museum of Country Life in Turlough.
* Dinner at The Grainne Uaile' in Newport.
* A free Pint at Pat's family's Pub in Swinford.

* 2 Nights in Sligo at the The Sligo City Hotel.

* We will have  a photo op at the foot of 'Benbulbin'.

* Dinner at *'Fiddlers Creek' in Sligo.

* 2 Nights in Donegal in Ballybofey or Donegal Town.
* Admission to *Tour Donegal Bay by the 'Bay Water Taxi'.
* Admission and a guided 'Tour of Donegal Castle'.
* A day trip to *'Derry in Northern Ireland'.
* Admission to a 'Guided walking tour of *The Wall of Derry'.
* A stop at *'Latte Da' in 'Cavan' on the way to Dublin.
*1 night in Dublin!
* Farewell dinner and Ireland show at ‘Taylors 3 Rocks’.
* Transportation to the Dublin airport to catch our flight home.
* In Philadelphia we will be meet our private bus and we will be taken back to Baltimore County where we were picked-up on Sept. 9th.