This Tour Includes:
* Roundtrip airfare to Dublin Ireland, (If you select the air option).
* Land transportation on a Luxury Coach by a professional driver.
* A full Irish breakfast every morning except day of arrival.
* Dinner every evening.

* A stop to visit Seamus at Boland's Bar in Swinford.

* A visit to the Shrine at Knock.
* Sightseeing ‘The Wild Atlantic Way’ by coach on Achill Island.
* Dinner on Achill Island.
* View Ireland's largest pyramid in County Mayo.
* A stop in Cong, the filming location for ’The Quiet Man’.
* Time to shop in Galway.
* Admission to the ‘Cliffs of Moher’.
* 2 Nights in Bunratty Castle Hotel.

* Admission to 'The Bunratty Medieval Banquet.

* A day pass to 'The Folk Park in Bunratty'.
* Admission and Tour to 'Bunratty Castle'.

Day 4 - Tuesday, after a full Irish breakfast we’ll check out of, 'The Bridge House Hotel', We will head West to the medieval town of Athlone, home of Athlone CastleandSean's Bar. Yesterday we avoided the spirits in

Charleville today we'll embrace the liquid spirits at the World’s oldest Pub, ‘Sean’s Bar’. Your tour guide will buy you a drink and lunch at, Sean's Bar. After being; educated, amused, entertained and mesmerized by Sean’s management’s explanation of how they invented whiskey right on the spot you’re standing, we will head North. Our destination is, ‘The Sligo Park Hotel’in Sligo. Dinner tonight will be at, ‘The Sligo Park Hotel’. 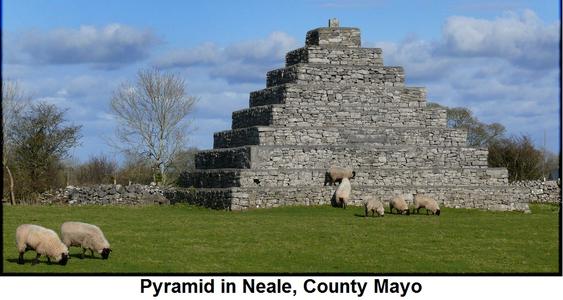 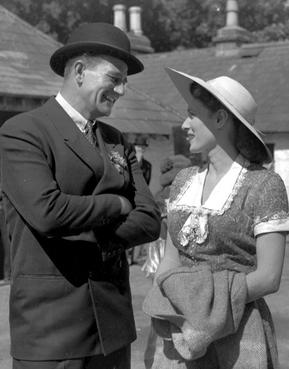 Click on any BLUE UNDERLINED word
in the ITINERARY for more information.

​Day 2 - Sunday, we arrive in Dublin. After collecting our luggage and clearing customs, we will board our 1st class coach and go to the nearby town of Malahide, for a private guided tour one of Ireland’s premier tourist attractions, Malahide Castle and Walled Garden. You may decide to lunch at the Castle or in the town of Malahide. We will enjoy the quaint town of Malahide while waiting for our late arrivals who are flying on another flight. After lunch, we'll drive West to the city of Tullamore the home of Tullamore D.E.W. We will enjoy a Tour and a Tasting at Tullamore. For the next two nights we'll stay at, 'The Bridge House Hotel' a 4-star hotel.  Dinner tonight is at the Bridge House Hotel.

Day 5 - Wednesday,after a full Irish breakfast at the Sligo Park Hotel, we'll board our luxury coach and enjoy a day trip to the town of Donegal. There are dozens of little shops and friendly pubs to grab lunch. We’ll have free time to stop and shop or pub hop in Donegal Town. We’ll have a private guided tour of, 'Donegal Castle'. After an afternoon of; history, pub hopping and shopping, We’ll return to Sligo town on the way, we'll stop at Yeat's Grave. Dinner will be at, 'Fiddler's Creek Restaurant and Bar' at 6:00 tonight. 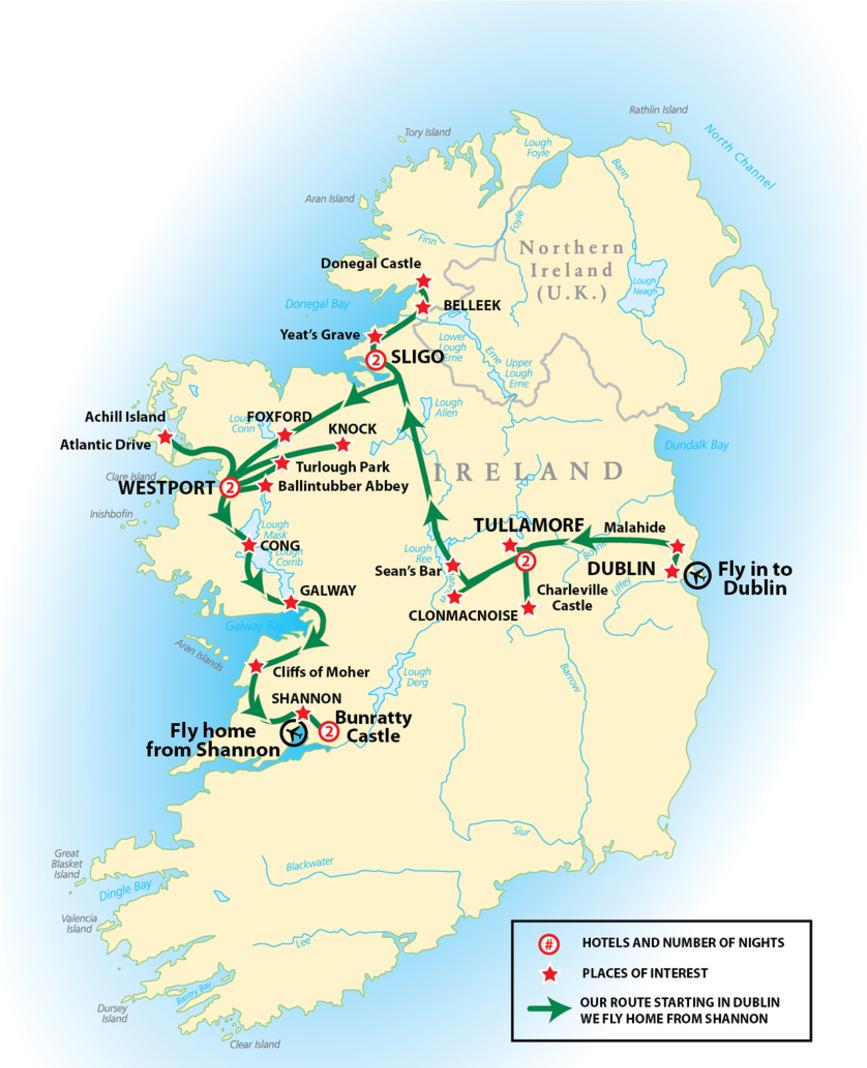 This Tour is at Activity Level one, 1
Click here to see the levels.

Day 8 - Saturday, after mass and a full Irish breakfast we’ll check out of the Westport Coast Hotel and head south to Cong (We’ll Leave the hotel about 9:00 am today). In Neale from the coach, you will view Ireland’s only pyramid. It was built in the eighteenth century by the first Baron of Kilmaine, John Brown! It was built to remember his dog or his brother Sir. George (there is still speculation if he built it for his dog or his brother!). (We’ll arrive in Cong about 10:00 am) Cong is the village where John Wayne starred in ‘The Quiet Man’.  We’ll take about a half hour and do a walking tour of Cong. (We’ll leave Cong at 11:00 am) Then it’s off to Galway.  With Thursday’s traffic, we’ll arrive in Galway about 12:30 pm in time for a late lunch and some sightseeing on foot. (We’ll visit Galway for about two and a half hours.) We’ll leave Galway about 3:00 pm we will travel through Gort to avoid the traffic in the Burren. We’ll arrive at the ‘Cliffs of Moher’ between 4:30 and 5 pm. With the proper mix of the wind and the sea, you will witness breathtaking views of Mother Nature from 702 feet above the sea. Mother Nature will decide how long we stay at the cliffs! Today’s final destination is an hour away. We arrive at ‘The Bunratty Castle Hotel’. You’ll have time to check-in and freshen up before our 7:00 pm Medieval Banquet at Bunratty Castle.

Day - 10 Monday, after a full Irish breakfast, we’ll Check-out of, The Bunratty Castle Hotel. It's a short drive to Shannon Airport. We have a bit of time at the duty-free shop because we must check-in a minimum of two hours before take-off. We’ll leave the land of smiling Irish eyes and take with us a million memories that will last a lifetime. Sad to leave but happy to return to the land of the free and the land of the brave.

Below is our friend Fred Chapell being interviewed by Ireland TV. His bit is at the end of this video about Durty Nelly's! Start with the button in the middle of the screen.

Day 3 - Monday, after a well-needed rest and a full Irish breakfast at, 'The Bridge House Hotel', we'll visit the Most Haunted Castle in Ireland, 'Charleville Castle'. We'll go early in the day because even the guides won't stay after dark! It’s a short hop down the road, through the oldest deepest forests of Charleville Castle, the “most haunted castle and grounds in Europe”. It appeared on Living TV's Most Haunted and Fox's Scariest Places on Earth. The most famous of these ghosts is that of a little girl called Harriet, who died after a fall in a staircase. It has also been visited by numerous paranormal investigators and psychics. It was  on ABC Family's Scariest Places on Earth. It also appeared on Ghost Hunters International. We will have a private guided tour of the castle. Our next stop is Clonmacnoise Monastic and Christian Settlement overlooking the River Shannon. Pope John Paul II thought it a significant enough site to visit during his trip to Ireland in 1979. The visitor center is complete with artifacts and audio-visual presentation. Our guided tour of the site is approximately 30 Minutes. Clonmacnoise has a tea room and gift shop. Perfect for a snacking lunch. We will return to, 'The Bridge House Hotel in time to freshen up for dinner.  Dinner tonight will be at ‘Sirocco’s’ the best Italian restaurant we have ever found in Ireland. 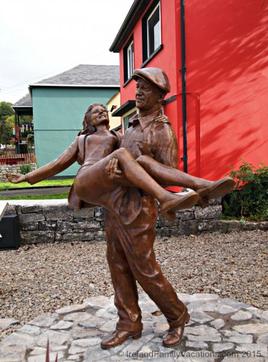 Patrick's Custom Tours reserves the right to substitute its, visits, entertainment, hotels and other features when they cannot be visited for reasons beyond our control.

2 Nights at 'The Bunratty Castle Hotel'

Day 1 - Saturday, we will be taken by luxury coach to Philadelphia International Airport, where we'll catch our overnight flight to Dublin, Ireland. People that took advantage of the opportunity to book their own airfare will unite with the group on Sunday in Malahide. Malahide is less than 6 miles from the airport, about a 7 dollar cab ride.

Day 7 - Friday,  after a full Irish breakfast, we will leave the Wyatt Hotel about 10:00 am and go to ‘The Museum of Country Life’. The museum is on the beautiful grounds and gardens of Turlough Park. It's a must for those of us with an interest in Irish living conditions from the days of ‘The Famine’. ‘The Museum of Country Life’ has exhibitions spread over four floors, you’ll see how the people of rural Ireland lived in the hundred years between the Great Famine and the end of the 1950s. This afternoon when we leave ‘The Museum of Country Life’ we will go to Achill Island for dinner. We will have a photo opportunity on Achill. We will stop to take photos on The Atlantic Drive on Achill with the Atlantic in the background. We will return to Westport in time to enjoy the music at local Pubs. 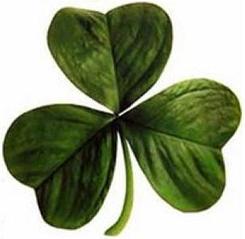 $1,661 Child Land Per Person Sharing, Book your own airfare and save!
​$2,503 Child's Full Package Per person Sharing, Includes Airfare.

Day 9 - Sunday, this morning if you're interested, we will take a short drive to Church. You will have the option to attend Wells Church, in Ballycunneen. We will return to The Bunratty Castle Hotel for breakfast. The balance of the day is free time to explore and enjoy all that Bunratty offers. The Bunratty Castle and Bunratty Folk Park are included in your package. You could easily spend the day in the Park. Across from the Bunratty Castle is 'The Buttery' a nice pub to have lunch. Next to the Buttery is an outlet for the Blarney Woolen Mills. Dinner tonight is at the world famous Durty Nelly’s!

Day 6 - Thursday, after a full Irish breakfast we will check out of, 'The Sligo Park Hotel' and about 10:00 am head South too, 'The Wyatt Hotel' in Westport, County  Mayo. About noon we will stop and buy a drink at Boland’s Bar in Swinford. Boland’s is a Pub that, "With the right reasons", could become an Irish habit! Hint, Patrick has visited Boland’s annually since 1960. Eight miles away is the 'Foxford Woolen Mills' where you can find great buys on area products.  Our final stop before our hotel will be, ‘Ballintubber Abbey’ where Catholic mass has been said daily for over 800 years. We’ll have a private guided tour and watch a short video about the Abbey and learn its interesting history.  Dinner tonight will be at the Wyatt Hotel. There will be live Trad music and Irish dancing in town tonight. A visit to, 'Matt Molloy's' Bar is a must for music lovers! Matt Molloy won several 'Grammy's' playing the flute with the 'The Chieftains'.